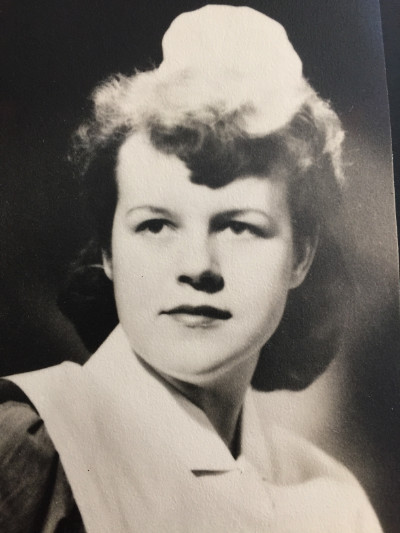 Betty was born on January 22nd, 1928 in New Bedford, Massachusetts. She was the daughter of Fred and Lucy Clarkson.

After graduating from New Bedford High School, Betty enrolled in the New Bedford St. Luke’s Hospital School of Nursing. Betty graduated as a Registered Nurse. In 1948 Betty was accepted into the Army Cadet Nursing Corp in New York City. It was there that she met her future husband, Chief in the Coast Guard, Oscar Franklin Boerner( Frank). One of the most endearing stories of their meeting was a first date when they rode the Staten Island Ferry back and forth for five cents. That’s right, they fell in love on the Staten Island Ferry. Betty and Frank were married that year. One year later, Betty gave birth to their first child, David.

Betty and Frank, and their growing family, moved several times as Frank accepted promotions within the medical equipment industry. Through all the moves, eight to be exact, Betty remained dedicated to her nursing career. Everywhere they lived, Betty worked as an RN in the local hospital. Her last job as a nurse was at Attic Angel Nursing Home in Madison, Wisconsin. After retiring from nursing, Betty and Frank moved to Cape Cod, where they lived in Sandwich, Massachusetts for 15 years. In 2003, to be closer to family, they moved to Bethlehem and bought a cottage at Moravian Village.

Betty and Frank travelled extensively in retirement, visiting England, Europe and Hawaii on several occasions. Betty loved people. She was an inspiration to her family and friends and she will be missed. We will always celebrate her love and devotion to family, and her many accomplishments.

Funeral Services are private arrangements by the Herron Funeral Home in Bethlehem. www.Herronfuneralhomes.com.