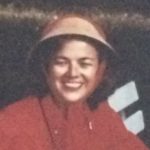 Carolyn Ruth Holt was born on March 18, 1930, in Pawtucket, RI, and died September 18, 2017, at St. Luke’s Hospice House in Bethlehem, PA, after a brief illness. She graduated from Brown University in 1951 with a degree in biology. She then trained and worked as a registered medical technologist at Rhode Island General Hospital in Providence and also did graduate work in biochemistry at Boston University. In January 1959, she and Shirley Flynn, her neighbor and friend from childhood up, took a Grace Lines cruise to South America. After a whirlwind romance with ship’s purser, John Arthur Homestead, she married him in October 1959. They made their home in Brooklyn, where she worked at Maimonides Hospital until their first child was born. They purchased the Roto-Rooter franchise for Allentown and Bethlehem in 1962 and built their house in Stafore Estates in Hanover Township, Northampton County, in 1964. They lived there until 2012, when they moved to Westminster Village in Allentown. Carolyn enjoyed gardening, cooking, and needlework and was a Girl Scout leader and Cub Scout pack mother. After she and her husband sold the franchise to their son in 1993, they took many ocean cruises, river boat cruises, and bus tours throughout Europe and the Americas, including cruising on the same route on which they met in 1959. Carolyn retained strong ties to her friends in Rhode Island, including Shirley Flynn, and she enjoyed visits and phone calls with the other commuter students from her college class, who, even in their eighties, called themselves “the town girls.” She was preceded in death by her parents, Robert Holt and Ruth Scot Holt, and her sister, Roberta Black. She is survived by her husband, John, her daughters Heather (Michael Leonard) and Melissa, son Bruce (Susan Kalamar), and granddaughter Fiona Leonard.

Celebration of life to be announced at a later date.