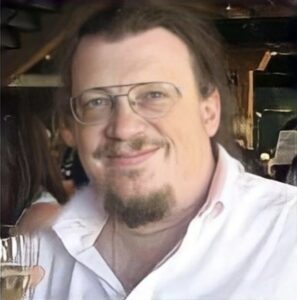 Christopher Francis Lett of Easton, PA passed away peacefully on November 4, 2022 due to complications of a stroke.  He was 64.  He is survived by his wife of 34 years, Diana Bruning Lett, his daughter Alexandra Lett, his son Nicholas Lett and his grandson, Oliver Cisneros.  Also mourning his loss are his father, Alexander Lett, his five siblings Kathy, Stephen, Stephanie, David and Brian Lett and numerous aunts, uncles, nieces, and nephews.

Chris attended St. John the Evangelist Elementary School in Mahopac, NY and was valedictorian of his graduating class.   He then attended John F. Kennedy Catholic High School in Somers, NY where in 1975 he and his father inaugurated the first high school micro computer curriculum in the country.  Together they built a computer from scratch for the school, soldering the mother board, connecting the circuits, and creating the magnetic tape input/output.  This achievement was profiled in Byte Magazine.  Ever the mental strategist, Chris enjoyed and studied chess, attending the World Chess Championships in London in 1986.

Chris studied at Rensselaer Polytechnic Institute in NY and spent his career programming and implementing world-wide financial applications for Citicorp.  He rose to Vice President and worked there for 35 years.

In his free time, Chris immersed himself in the achievements of NASA and space travel, never missing a NASA mission launch.  He also had a love for France, especially for Paris.  Chris’ favorite painting was “Afternoon on the Island of La Grande Jatte” by George Seurat.

Looking over his life, Chris especially cherished summers in Sag Harbor and fall/winter in the Berkshires. These were precious memories of time spent with his family.

The Lett Family is planning a funeral mass for Christopher in January of 2023.  Please contact Kathy Lett at [email protected] or (831) 238-0118 if you would like information.

Donations in memory of Christopher can be made to

or The American Stroke Association https://www.stroke.org/en/?form=FUNCNKRYYTR