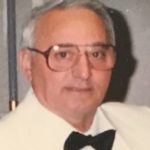 Christos N. Athanasiou 79 of Bethlehem died on November 2, 2017 at home surrounded by his family. The beloved husband of Anna (Dartouzos) Athanasiou, they were married 49 years on September 7th.

Christos was born in Mavromati, Thivon, Greece on April 14, 1937, son of the late Nikolaos and Konstantina (Dritsas) Athanasiou.

Chris served in the Greek Air Force and met his future wife Anna while he was working on a Greek Ship called the Olympia. Anna and Christos were married on September 7, 1968. Chris came to the United States and settled in Bethlehem.   He was the owner of Chris’s Restaurant on Route 412 in Bethlehem for 49 years. He always felt honored and privileged to serve so many wonderful customers who had become his friends over the years.

Chris was a proud man who cared deeply for his family and worked hard to provide them with a wonderful life.

Christos was a member of St. Nicholas Greek Orthodox Cathedral in Bethlehem.

Service: Funeral Service on Tuesday November 7, 2017 at 11 AM in St. Nicholas Greek Orthodox Cathedral, with a viewing on Monday from 6PM to 8PM, followed by a Trisagion Service at 8:15PM in the Cathedral. Funeral arrangements are by the John F. Herron Funeral Home in Bethlehem.