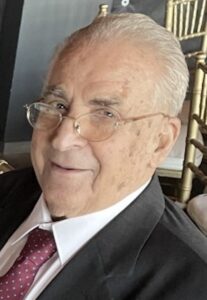 George C. Yialamas, 92 of Kutztown, formerly of Allentown, passed away on November 1, 2022 surrounded by  family at Lehigh Valley Hospital in Allentown.   George was born in Filia, Lesvos, Greece on December 26, 1929, son of the late Constantine and Dorothea (Vamvakoula) Yialamas. He served in the Greek military, married, and emigrated to the United States in 1955. He deeply loved both Greece and the US.   He was a Real Estate Developer in Allentown as well as a Licensed Master Electrician and Licensed Master Plumber.  He was a beekeeper, goat and chicken farmer, and an avid deer hunter. He enjoyed people, good food, dancing, music, and poetry. He was devoted to the family business a coffee house in Filia, Greece, which was operated by his brother Efstratios for many years.  He was the Founder and President of the Filian Society  and Past President of the Order of AHEPA Allentown Chapter #60 which were Greek-American cultural and philanthropic organizations.  He was a member of St. Nicholas Greek Orthodox Cathedral in Bethlehem and also attended St Mathews in Blandon PA.

Contributions:  In lieu of flowers you may send a donation to his son Nick Yialamas, c/o Herron Funeral Home 458 Center St. Bethlehem, PA  18018. Monies collected will be used for a much-needed upgrade to the electrical service at the Elementary School in his hometown of Filia, Lesvos, Greece.