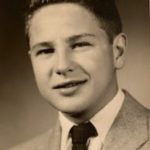 Gordon Paul Groenke, 82 of Fridley, Minnesota passed away on January 16, 2020 in the loving arms of his daughter, Cindy Foxe of Bethlehem, PA. Funeral services will be held June 19, 2020 at 1:30 at Fort Snelling National Cemetery, Minneapolis Minnesota, with Military Honors.

He was a steel worker at Paper Calmeson & Company until his retirement.

He proudly served in the United States Navy with the NINTH Naval District and continued with the Reserves through 1962.