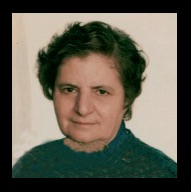 Hrisa was born on November 12, 1928 in Filia, Greece, daughter of the late Stergios and Evrikomi (Marmarou) Savas.

She was a member of St. Nicholas Greek Orthodox Cathedral and was active in Philoptochos and the Senior Citizen’s. She helped out in the family’s Town & Country Restaurant in Bath.