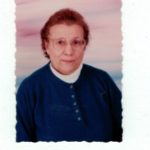 Irene Halkias, 81 of Allentown died on February 24, 2017. Wife of the late George Halkias.

Irene was born on March 13, 1935 in Kea, Greece, daughter of the late Franco and Frangula (Politis) Mouzakis. When Irene was six months old her mother died and was raised by her stepmother Eleftheria Mouzakis.

She was the owner of Ginny’s Luncheonette in Bethlehem for over 20 years. Earlier she and her late husband George owned and operated the Electric Laundry and Dry cleaning Company on Stefko Blvd. from 1974 to 1982.

Irene was a member of St. Nicholas Greek Orthodox Cathedral in Bethlehem.

She was also a member of the Daughters of Penelope.

Survivors: Her sons George Halkias, Jr., husband of Maria of Allentown and Frank  Halkias, husband of Barbara of Slatington; grandchildren Zachari, Victoria and Lorena; brother George Mouzakis of Catasauqua and sister Mary, Antonia, Kiki and brother Vangelis Mouzakis all of Greece. Irene is also survived by many nieces, nephews and extended family.

Service: Funeral Service on Thursday March 2, 2017 at 11 AM in St. Nicholas Greek Orthodox Cathedral 1607 West Union Blvd. Bethlehem, with a viewing from 10AM to 11 AM in the Cathedral. Burial to follow the service in Cedar Hill Memorial Park Cemetery in Allentown. Funeral arrangements are by the John F. Herron funeral Home in Bethlehem.

Contributions: In her memory to the Cathedral.