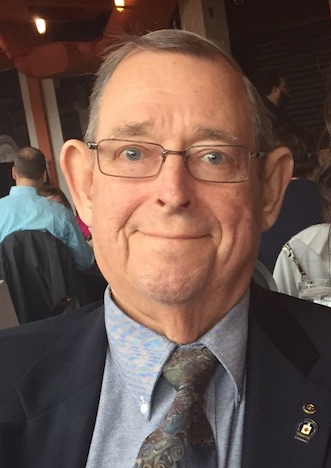 John graduated from Northfield High School in 1962 and received his BA in History from Northeastern University in 1966. He entered in to the Foreign Service in 1966, retiring in 1979. He then purchased the Advanced Travel Agency in Allentown in 1980, which he owned and managed until 1990. Later, John became an accountant for various small companies in the Lehigh Valley.

John served as President of the Ballet Guild of the Lehigh Valley for 10 years. John was a member of Rotary for over 40 years and was a member of the Bethlehem Masonic Lodge #285 F & A.M.
A man of lively intellect, wit, and good humor, John loved traveling, political discussions and a good joke. He treasured his family and friends.
John was a member of St. Katherine Greek Orthodox Church in Naples, FL.

Service: There will be a viewing on Wednesday February 20, from 6PM-8PM and on Thursday February 21, from 10AM-11AM followed by the Funeral Service at 11AM in the John F. Herron Funeral Home 458 Center At Market Street, Bethlehem, PA 18018. Burial will follow in Nisky Hill Cemetery in Bethlehem. www.Herronfuneralhomes.com.