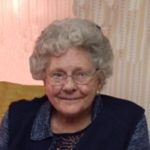 A mother, grandmother and great-grandmother, Joyce was the widow of Melvin Edwin Kraft, who died in 2015.

The life-long Allentown resident was born on Dec. 19,1924, a daughter of the late Roy and Anna (Jacoby) Snyder.

She was a 1941 graduate of Allentown High School. She was last employed at General Electric. Previously she worked in Hess’s department store.

She was a member of St. John’s United Church of Christ in Emmaus and formally a long-time member of Grace Lutheran Church in Allentown, where she taught Sunday School.