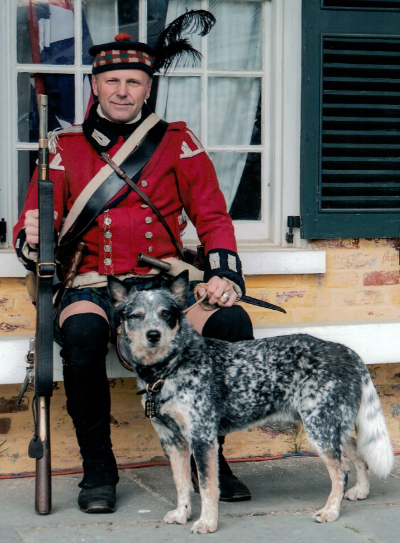 Keith “Kit” Brown, 57, of Coopersburg Pennsylvania, passed away on January 16, 2022 at Lehigh Valley Hospital-Cedar Crest.  He is survived by his beloved wife, Erin Wyckoff Brown; they would have been married 8 years on June 7th.

Kit would say he attended the University of Science, Music, and Culture (“USMC”), which most of us would know as the United Stated Marine Corps. He served in the Marine Corps from 1984 to 1989 where he started out at Parris Island as a Private, trained at the Communication Electronics School in Twenty-nine Palms CA, and served wherever the country sent him, including Panama in the late 80s. He was honorably discharged as a Sergeant in 1989.

He centered much of his life around dogs. During the work week he was the Operations Manager at Annamaet Petfoods, spent many years sled dog racing, rescuing greyhounds, and raising Australian Cattle dogs. His other passions were historical reenacting, running, sampling beers at local breweries, and above all, enjoying the company of friends. He met his wife at a Revolutionary War reenactment where his dog, William, brought them together. Outside of the Revolutionary War, he highly enjoyed WW1 and Boer War reenacting, as well as other time periods if it involved him portraying a Scotsman!  He was curious and knowledgeable, seeking to learn more about the history of various times through living them as authentically as possible.

Kit’s life is one that could never be adequately portrayed in a few paragraphs, rather it is one that is best pictured by all the love and camaraderie that surrounded him. He was always his authentic self, unconventional, fun-loving, faithful, loyal, true, deep, and charismatic. He will be missed by many.

A Celebration of Life will be held at a later date.

Contributions: In lieu of flowers, contributions can be made in Kit’s memory to BattleBorne (Veteran’s Organization) at https://wearebattleborne.com, Freedom First Rescue at https://freedomfirstrescue.com/, or K911 Lost Dog Search-Team Ruby at https://k911lostdogsearch.org/services.