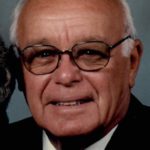 Robert was born in Allentown on October 31, 1929, son of the late Joseph and Dorothy (Hammersly) Trumbauer.

He graduated from Allentown High School in 1947 and served in the Army National Guard for 10 years.

He was mechanic at Mack Trucks for 30 years retiring in 1986.

Robert was an avid camper, loved to travel in his RV and was a stained glass artist. He befriended everyone, loved tinkering and building things, including his own house.

Contributions: In lieu of flowers the family would appreciate contributions to a charity of your choice.