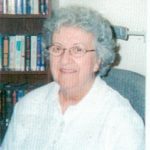 Rose M. Kenyi, 93 of Allentown died on September 14, 2016 at Lehigh Valley Hospital-Cedar Crest. She was the wife of the late Joseph J. Kenyi.

Rose was born in Northampton on April 29, 1923, daughter of the late Stephen and Theresa (Teveli) Csencitz Recker.

During World War II she was “Rosie the Riveter” as a welder for Vultee Manufacturing, later she was a sewing machine operator for Seanymth Swimwear and a slide printer for Classic Photo in Allentown.

Rose was a member of the Cathedral of St. Catharine of Siena and a former member of St. Stephen’s of Hungary RCC in Allentown.

Service:    The will be a viewing on Saturday September 17, 2016 from 9AM to 10 AM followed by a service at 10 AM in the Sell-Herron Funeral Home 1145 Lehigh Street Allentown. Burial to follow in Resurrection Cemetery in Wescosville.