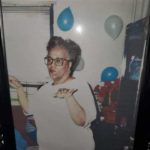 Alice May Williams, 77 of Allentown departed this life on October 24, 2020 at home surrounded by her family.

Alice was the wife of Charles W. Williams. She was predeceased by her husband William Walter Bey.

Alice was born on May 30, 1943 in Brooklyn, New York daughter of the late Herbert and Solonia (Lemon) Cook. Alice was the youngest of eight children, she was predeceased by Herbert, James, Elva, Pete, Mitchel, William and Warren

Alice married the late William Walter Bey and through that union, she had William Cook , Mia Bey, Lynn Bey and she was predeceased by a son Matthew Bey. Alice then married Charles W. Williams and that union ,she had Charles Williams, Dawn Williams and Jason Williams.

There will be a viewing on Friday October 30, 2020 from 2PM to 4 PM in the Sell-Herron Funeral Home 1145 Lehigh Street Allentown, PA 18103. The Hospice Chaplain Rebecca Chandler will offer a Prayer Service during the viewing time. www.Herronfuneralhomes.com