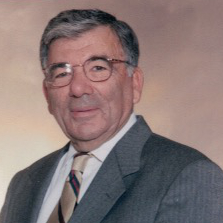 Anthony was a born in Ismailia, Egypt on November 10, 1925 to the late Emmanuel and Marica (Protopapas) Diamandoulis.  He completed boarding school at Mansura, (now Mansura College), in Egypt in 1944.   Anthony was a Greek citizen, so following school he was drafted into the Greek Royal Navy.  Anthony met Beulah during his time in the armed services.

Anthony was a well-known Painting Contractor in the Lehigh Valley for over 60 years.    He was a faithful member of St. Nicholas Greek Orthodox Cathedral in Bethlehem, PA.  Anthony was also a proud 50 year member of the F&M Masonic Lodge #283, a Shriner, a member of the Rajah Temple, and a 32nd Degree Mason of the Lehigh Consistory in Allentown.

A viewing will be held on Wednesday, August 14th from 10:00-11:00AM followed by a funeral service at 11:00AM at the St. Nicholas Greek Orthodox Cathedral, 1607 W. Union Blvd., Bethlehem, PA 18018.  Burial to follow at Cedar Hill Memorial Park in Allentown.  Arrangements are by the John F. Herron Funeral Home, 458 Center Street, Bethlehem.  www.herronfuneralhomes.com.