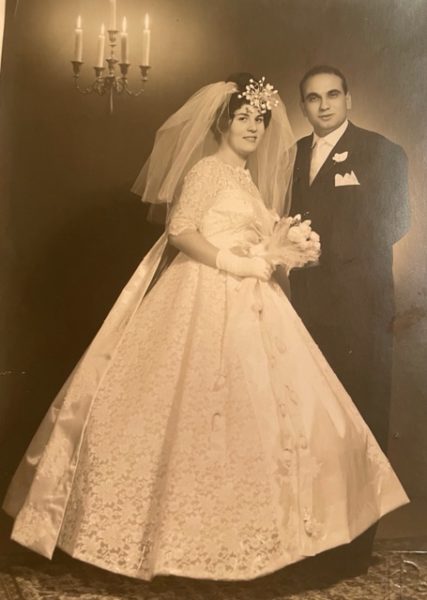 Elefteria Hatzinikolaou, 79, passed away peacefully  at home on December 12, 2021 and her husband Antonios Hatzinikolaou. 89, serenely passed away on December 16, 2021.  Theirs was a true love story and their lives were intertwined for decades as they would have been married 62 years in May.

Both born in Greece, Elefteria and Antonios found in each other what it meant to truly be a family.  Born on May 9, 1942, Elefteria was daughter of the late Christos and Olga (Palla) Papathanasiou and Antonios was born on June 22, 1933 to the late Vasilios and Chrisi Hatzinikolaou.  The couple treasured their upbringing in Greece and although they moved to the United States in 1968, Elefteria and Antonios often visited their beautiful homeland.  Their deep pride, loyalty, and love for Greece was passed on to their son and grandchildren.

Elefteria and Antonios were devoted to each other and were partners in all things.  Together, they owned Tony’s Surf and Sand Steak Shop in Rehoboth Beach for over 30 years.  Elefteria was curious, hard-working and devoted, and every single thing she did was with great intention.  Antonios was gregarious, outgoing, and generous and loved nothing more than an animated conversation (a signature trait he passed on to his son).  Greek music was a source of joy for Elefteria and Antonios and they would often close the shop early if they heard that Greek singers were performing in Atlantic City.  And when Greek TV and soap operas finally arrived in Delaware, there was no one happier than Elefteria!  Together they traveled many places but they were also grateful and content to enjoy time at home with their family.

As a mother and Yiayia, Elefteria was fiercely protective and loving.  She was patient, supportive, empathetic, and believed deeply in fate and in love.  Like the Greek mother that she was, she prayed (and worried) a lot.  And as a father and Papou, Antonios was devoted, giving and lovingly stern.  He was industrious (having worked in a fruit market, as a bus driver and owned a taxi!), dedicated, and enthusiastic, and his positive outlook and chatty personality inspired those around him.   Their only son was blessed to inherit many wonderful qualities, including their work ethic and deep appreciation for the simple things in life.  They cherished their family and truly treasured the time spent together.  They adored living by the beach and raising their son there, and they were filled with joy seeing their grandchildren grow to love it as well.

Elefteria and Antonios shared an abiding faith that is another one of the many glorious attributes they passed on to their family. They loved each other endlessly and are together now forever.  They were members of St. Andrew The Apostle Orthodox Church in Lewes, DE and attended St. Nicholas Greek Orthodox Cathedral in Bethlehem.  They had a truly abundant life and their memory will be eternal.

Survivors:  Elefteria and Antonios will be deeply missed by their son Vasilios, husband of Zaharo of Bethlehem, and two grandchildren Antonios and Eleftheria.  Antonios is survived by step-brother George in Greece.  Both also leave behind beloved nieces and nephews, and many loving cousins and family members in Greece.  Elefteria was predeceased by her sister Athanasia and brother in law Nicholas.  Antonios was predeceased by his step brother, Nicholas and stepsister, Soula.

Combined Viewing and Service:  Thursday, December 23, 2021, viewing 10AM to 11AM followed by the Funeral Service at 11AM all at St. Nicholas Greek Orthodox Cathedral 1607 West Union Blvd. Bethlehem, PA  18018. The service will be livestreamed using www.stnicholas.org/Hatzinikolaou   Burial to follow in Cedar Hill Memorial Park Cemetery in Allentown.  Funeral arrangements are by the Herron Funeral Home in Bethlehem www.Herronfuneralhomes.com