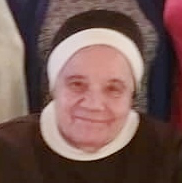 Barbara was born in Troy, NY on January 20, 1939, daughter of the late Robert and Dorothy (Gilly) Lester.

Barbara was a member of St. Francis of Assisi Church in Allentown.  Following the death of her husband Barbara became a Consecrated Widow of the Good Shepherd taking the name of Sister Elizabeth Ann Seton.  She was a Eucharistic Minister and volunteered at Lehigh Valley Hospital for many years.   When she was 80 she went parasailing on Lake George.

Service: Funeral Mass on Friday August 23, 2019 at 1:30PM with a calling from 1PM to 1:30PM all at St. Francis of Assisi Church 1049 W. Cedar  Street Allentown. Burial in Highland Memorial Park Cemetery in Allentown. Funeral arrangements by the Sell-Herron Funeral Home in Allentown, www.Herronfuneralhomes.com.