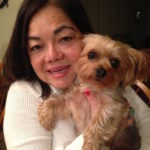 Beau M. Kourkounakis, 70, of Easton passed away on December 10, 2017 at Temple University Hospital in Philadelphia. Wife of George A. Kourkounakis, they were married 38 years on July 20th.

She attended Ling Tung University in Taipei prior to moving to the United States. She was most recently a homemaker and previously worked in retail management for Southland Corporation.

She was a devoted and loving wife, mother, grandmother, sister and aunt. Her kindness, thoughtfulness and loving nature were just a few of her many positive attributes.