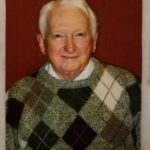 Carl E. Fleming was called from labor the 2nd of June, 2020. Carl, the son of Elmer and Virgie Fleming, deceased, graduated from Stroudsburg High School in 1943. Shortly thereafter he was accepted as an aviation cadet in the U.S. Army Airforce. After graduating with his wings and commission in 1944, he was assigned to the 15th Air Force in Italy until the end of the war in 1945.

In the fall of 1955, he was recalled into the Korean Conflict, flying with the 20th Air Force over Korea. Carl and Shirley enjoyed crisscrossing the 48 states trailing with their two sons Keith and Scott. They followed this with sailing on the lake for several years.

Carl is survived by his two sons, Keith and wife Cheryl of Palmer Township, Scott and his wife Kerri of Bethlehem Township, five grandchildren, Kyle and wife Christen of Nazareth, Korey of Palmer Township, Brittany Bakshi and husband Neil of Harrisburg, Jameson and his wife Carly of Bloomfield, NJ, and Garritt and his wife Sanette, both Moravian pastors in Nazareth, PA and 6 great grandchildren. Carl was predeceased by his wife, Shirley, of 65 years in 2010, and by his sister, Catherine Rice of Stroudsburg and Ohio.

In lieu of flowers contributions can be made to the Palmer Moravian Church.