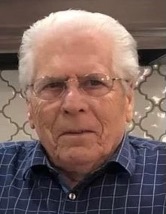 Christos Argeros, 81 of Bath passed away on April 29, 2022 at  Lehigh Valley Hospital-Muhlenberg in Bethlehem.  Christos was the wife of Katina (Argeros) Argeros, they would have been married 56 years on November 27th.

Christos was born in Othonoi, Corfu, Greece on June 11, 1940 son of the late Vasili and Agatha (Argeros) Argeros.

He was a self-employed painter for many years.

Viewing and Service:  Thursday May 5, 2022, viewing 11AM to 12 noon followed by the Funeral Service at 12noon all at St. Nicholas Greek Orthodox Cathedral 1607 West Union Blvd. Bethlehem, PA  18018. The Funeral will be livestreamed using www.stnicholas.org/livestream  Burial to follow in Bethlehem Memorial Park Cemetery. Funeral arrangements are by the Herron Funeral Home in Bethlehem,  www.Herronfuneralhomes.com

Contributions: In his memory to the Cathedral.