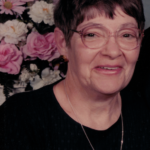 Clara was born in Allentown on October 18, 1943, daughter of the late Richard and Hilda (Holtzman) Gehris.

Clara was a matcher at Phoenix Clothing for 26 years and later worked in the Dietary Department at Good Shepherd Home for 10 years.

Service: Private at the convenience of the family. Funeral arrangements by the, Sell-Herron Funeral Home in Allentown.