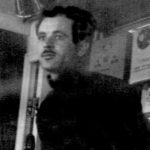 Dimitrios “Jimmy” Manesis, 85 of Bethlehem died on August 19, 2017 at St. Luke’s Hospital in Fountain Hill. Dimitrios was the husband of Angeliki (Malitsis) Manesis, they were married for over 65 years.

Dimitrios was born in Othoni (Damaskatika-5) Corfu, Greece on May 1, 1932 son of the late Nicholas and Angeliki Manesis.

He was the owner the Blue Anchor Restaurant for a few years, then he owned the Greek Island Coffee House and later he owned Manesis Painting in Bethlehem.

Survivors: His wife Angeliki, their sons Nicholas, husband of Doris and Aristidis, husband of Isabella all of Riegelsville; five grandchildren Gino, David, Ariella, Dimitrios and Alessia; sister Ioanna Pappas and brother Kostas both of Athens,Greece and many nieces and nephews.

Service: Funeral service on Friday August 25, 2017 at 11 AM, viewing 10AM to 11 AM in St. Nicholas Greek Orthodox Cathedral 1607 West Union Blvd, Bethlehem. Burial in Nisky Hill Cemetery, Bethlehem. Funeral arrangements are by the John F. Herron Funeral Home in Bethlehem.