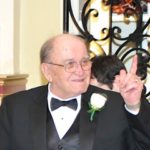 James J. Wasyl, 88 of Allentown died on June 26, 2016 at home. Husband of the late Alverna (Daddona) Wasyl and the late Grace (Venditto) Wasyl.

James was born in Allentown son of the late Joseph and Cora (Kemmerer) Wasyl.

Jim served in the US Army during World War II and later in the Merchant Marines during the Korean War.

He was a warehouse supervisor for Sears & Roebuck retiring in 1989 after 38 years. After he retired he was a custodian for IMC for 13 years and for the City of Allentown for over 20 years.

Service: There will be a viewing on Wednesday June 29, 2016 from 10 AM to 11AM in Immaculate Conception Catholic Church 501 Ridge Avenue in Allentown followed by his Mass of Christian Burial at 11 AM. Burial to follow in Our Lady of Mt Carmel Cemetery, Whitehall. Funeral arrangements are by the Sell-Herron Funeral Home 1145 Lehigh Street Allentown.

Contributions: In his memory to Lehigh Valley Hospice