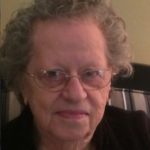 Lucille C. Hallman, 88 of Allentown died on January 13, 2017 at home surrounded by her family. She was the wife of the late Jay Hallman.

Lucille was born in Allentown on December 16, 1928 daughter of the late Quincey and Esther (Hummel) Buskirk.

She was an office manager for the Allentown State Hospital Credit Union for many years.

Lucille was a member of St. Luke’s Lutheran Church in Allentown, where she was active with the Senior Citizens and Altar Guild.

She was also active with the Shriner’s along with her husband Jay.