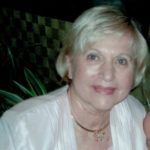 Frances Dectis, 84, of Allentown and Cape May, NJ passed away on Sunday, January 15, 2017 in the Inpatient Hospice Unit at Lehigh Valley Hospital.

She was the wife of Charles Dectis who died on December 14, 2008. They were married for 54 years.

Born in Allentown, she was a daughter of the late Peter and Kiki (Kalfas) Athans.

Frances graduated from Allentown High School and earned an Associate’s Degree from Moravian College.  After graduating, she was a reporter for The Morning Call. Later, she worked along with her husband in the family business, Charles Dectis Painting.

She loved spending time in Cape May, NJ, but her true love was her family.

Survivors: Her son, Peter N. and his wife, Julie of Orefield, her daughter, Sandra and her husband, John Sterns of Bethlehem; three granddaughters, Kristin, and her husband, Nathan Keys; Alexa and Nicole Dectis; two great-grandchildren, Ellyana and Ryder Keys. Frances was predeceased by, her sister, Pauline Kartsotis.

Services: Funeral Service on Friday January 20, 2017 at 11 AM in St. Nicholas Greek Orthodox Cathedral, 1607 W. Union Blvd. Bethlehem. There will be a viewing on Thursday from 7PM to 9 PM, with a Trisagion Service at 7:45 PM and on Friday from 10AM to 11 AM in the Cathedral. Burial will be in Cedar Hill Memorial Park Cemetery in Allentown. Funeral arrangements are by the John F. Herron Funeral Home in Bethlehem.

Contributions: May be made in her memory to St. Nicholas Greek Orthodox Cathedral, c/o the building committee.