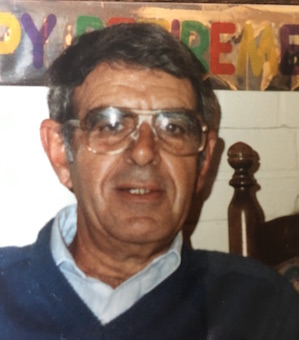 John was born in Bethlehem on February 16, 1928 son of the late Nicholas and Patra (Guyali) Galitis

John graduated from Liberty High School in 1946.  He served in the US Army during World War II and the Korean War

He was a supervisor at Western Electric, retiring after 39 years

He was a member of St. Nicholas Greek Orthodox Cathedral, serving as the Executive Secretary of the Building Committee.  He was Past President and a 50year member of the Order of Ahepa Homer Chapter #65 in Bethlehem

John volunteered for RADPRIN and for many years for the Musikfest Flower Committee, was the Stage Manager for Kinderplatz, Rose Garden Children’s Festival, Bethlehem 250th Anniversary.  He was an avid golfer who scored a Hole In One at Shepherd Hills Country Club

Service:  Funeral service on Thursday January 26, 2017 at 11AM in St. Nicholas Greek Orthodox Cathedral 1607 West Union Blvd. Bethlehem.  There will be a viewing from 10AM to 11 AM in the Cathedral.  Entombment in Bethlehem Memorial Park Mausoleum.  Funeral arrangements are by the John F. Herron Funeral Home in Bethlehem