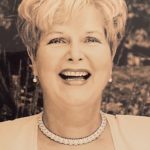 Mary Ellen (Williams) Fisher passed away on September 19, 2021 at Lehigh Valley Hospital surrounded by her family. She would have turned 80 years old on September 24th.

She was born in 1941 in Hasbrouck Heights, NJ, the daughter of Edward G. Williams and Teresa (Mentes) Williams. Her father was a successful entrepreneur who started the Jersey Spreader Corporation, which produced paving equipment used in building parts of the Interstate Highway System. Mary Ellen graduated from Hasbrouck Heights High School in 1959 and attended Centenary College. Decades later, she still nurtured close friendships with many of her high school and college classmates. She began her career at Look Magazine in New York in the early 1960s, later returning to school and graduating from Montclair State Teachers College and earning a master’s degree in education from Lehigh University.

Mary Ellen moved to Bethlehem in 1970 with her first husband, David P. Bloys, who co-founded software company Pentamation Enterprises. Raising their three sons was her calling and source of great joy. She also worked as a substitute teacher, a counselor, and a case worker for the PA Department of Aging in Harrisburg. In 1993 she married Richard Fisher, former CEO of BethEnergy, a division of Bethlehem Steel. They lived in Emmaus from 1995 until her passing.

Mary Ellen was very social and loved talking with — and listening to — friends and strangers alike. She loved to ask questions, and her charm and curiosity enabled her to get anyone’s life story in a matter of minutes. She was well read and had strong opinions on politics and culture, particularly movies, television and theater. She was appalled at the state of today’s Republican Party and hoped for positive changes.