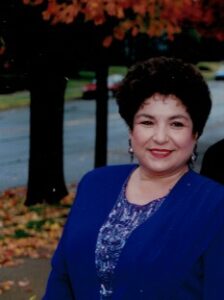 Mary P. Moukoulis, 78 of Bethlehem passed away on October 17, 2022, at Lehigh Valley Hospital-Cedar Crest.  Mary was the wife of Thomas V. Moukoulis for 49 years until his passing on February 8, 2016.

Mary was born in the village of Pano Lefkara, on the Mediterranean Island of Cyprus on January 26, 1944, daughter of the late Harry G. and Chrystalla H. (Kousouros) Pitsilos. At the age of 5, she immigrated to the United States on November 29, 1949, arriving at John F. Kennedy Airport in Queens, NY.

Mary graduated from Liberty High School in 1962 and received her BA in Elementary Education from Moravian College in 1966.

She was an elementary school teacher for the Bethlehem Area School District, and taught 6th and 3rd grades at Clearview and William Penn Elementary Schools retiring after 31 years.

Mary had a creative, artistic side and loved painting. She learned oil painting during her time at Moravian College and then later in life concentrated on watercolor. Her favorite thing to paint was flowers.

Viewing  & Service: Friday October 28, 2022 from 6PM to 8PM and on Saturday October 29, 2022 from 10AM to 11AM followed by the Funeral Service at 11AM  all at St. Nicholas Greek Orthodox Cathedral 1607 West Union Blvd. Bethlehem, PA  18018.  Burial to follow in Cedar Hill Memorial Park Cemetery in Allentown. The funeral will be live streamed using: www.stnicholas.org/MoukoulisFuneral

Funeral arrangements are by the  Herron Funeral Home 458 Center At Market Street in Bethlehem, PA  18018.  www.Herronfuneralhomes.com

Contributions:  In lieu of flowers contributions in Mary’s memory may be made to the St. Nicholas Cathedral Senior Citizens in care of the Funeral Home.