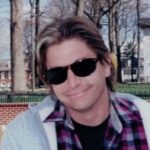 Michael was born in Bethlehem on August 13, 1959, son of Isabelle (Smith) Beers and the late Edward C. Beers.

He was a carpenter for the former Beers Construction in Bethlehem.