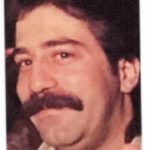 Michael E. Cuvo, 56 of Easton, lost his battle against underlying medical conditions on May 3, 2021.

He was the son of the late Richard R. and Mary (Hamerstone) Cuvo, Sr.

He had been employed by the Hub Cap store in Easton for over 20 years.

He is survived by his siblings, Richard Jr. (Diane), Charles (Chris), Tina (Edward), John (Amanda), his fiancé Alicia Flagler and many nieces and nephews.

At Michael’s request there will be no service, www.Herronfuneralhomes.com