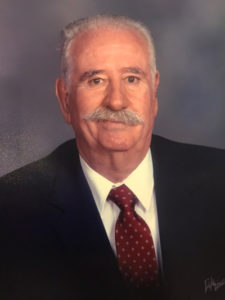 Theodore Kourpas, 91 of Bethlehem died on April 3, 2020 at Lehigh Valley Hospital-Cedar Crest. Husband of the late Katina (Bahas) Kourpas for 57 years until her death on July 20, 2017.

Theodore was born on November 18, 1928 in, Chios, Greece, son of the late Demetrios and Theodora ( Stamoule) Kourpas. Theodore grew up on the island of Chios and went to school until the sixth grade so he could help his father tend to the crops on the family farm.  He served in the Greek Army for two years.   Theodore was also shoemaker and a barber in Chios.

Theodore emigrated to the US in 1957  and worked for his Uncle Pete in the Hot Dog Business.  Theodore married his wife Katina in July of 1960. Theodore  later became the owner of Pete’s Hotdog in Bethlehem from 1959 to 1989.   Katina and Theodore were gracious hosts always opening their home to visitors, to entertain their guests and to welcome new people to their community.

He was an active member of St. Nicholas Greek Orthodox Cathedral in Bethlehem. Theodore was Past President of the Church Council, member of the Senior Citizens of the Church and worked for many years in the kitchen for the annual church bazaars.

Service:  Private and will be live streamed at 11AM on Thursday April 9th from St. Nicholas Greek Orthodox Cathedral using, www.stnicholas.org/kourpas. It will be available 15 minutes prior to the service. Private burial in Cedar Hill Memorial Park in Allentown. www.Herronfuneralhomes.com.