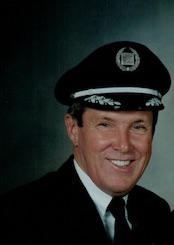 Bill was born in Rochester, NY on June 30, 1942, son of the late Norman and Dorothy (Truscott) Standing.  Bill married Patti Case on September 6, 1997, and they shared over 21 wonderful years as husband and wife.

He served in the U.S. Air Force during the Vietnam War and received numerous awards including the Service Medal with three Bronze Service Stars, the Flying Cross, and three Air Medals.  He was part of the Air Force Electronic Warfare Systems and received Top Secret/Crypto security clearance.

Bill was a Chief Flight Instructor and Charter Pilot at Ray Hylan School in Rochester, NY; a Chief Pilot for Braden’s Flying Service in Easton, PA; a Corporate Pilot at Bethlehem Steel Co. in Bethlehem, PA; and Manager of Flight Operations as well as Chief Pilot for Geostar Corporation in Princeton, NJ.  He was First Officer at Piedmont Airways and a Captain with US Airways until he retired. He joined the Federal Aviation Administration (FAA), working in Fort Lauderdale, FL, Philadelphia, PA, and Miami, FL, serving as a Principal Operations Inspector and International Air Carrier Inspector. He finished his career at the FAA Academy in Oklahoma City as a Course Manager and Instructor for International Aviation Safety.  Bill retired from the FAA on June 30, 2017.

Bill’s aviation career was distinguished by his certification as an Airline Transportation Pilot, Certified Flight Instructor, Advanced and Instrumental Ground Instructor, and FAA Designated Pilot Examiner in Leigh Valley for over 30 years.  Bill also was a recipient of the much-coveted Wright Brothers Master Pilot Award.  Bill rejoiced in, and shared his knowledge and passion of aviation for over 60 years.

Bill started flying when he was 14, because his love for airplanes and aviation was in his heart and soul.  He was considered by most as an expert in his field for his incredible knowledge of aviation and the aviation industry.  He was respected by everyone who knew him, and he was loved by so many.  Bill was a devoted Christian man and he loved life.  Patti said, “This only touches the surface of his accolades.  He was an incredibly gentle, kind man. His death is a huge loss for the Aviation Industry… it was his passion. Bill and I have been soul mates and best friends for over 28 years.  I loved my husband so much, and I miss him incredibly.  He is at peace and with our Lord, I will see him again.”

Service:  A Celebration of Life will be held on April 13, 2019 at 1PM at Faith Lutheran Church, 2012 Sullivan Trail, Easton, PA 18040.   Following the Celebration Patti will receive friends and family at a luncheon at the Church. Funeral arrangements are by the John F. Herron Funeral Home and Herron Crematory in Bethlehem.