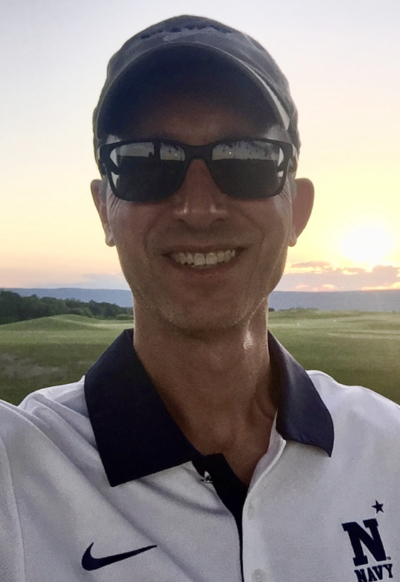 Anthony R. Kyvelos, 52, of Fogelsville passed away on August 4, 2021 from injuries sustained in a bicycle crash. He was the husband of Kristen (Fleming). They were married on April 19, 1997, in Annapolis, MD and were married for 24 years.

Anthony was born in Queens, New York on October 14, 1968, son of Daniel and Margaret (Lyman) Kyvelos. He grew up on Staten Island and graduated from Tottenville High School in 1986 where he was a member of the track and cross country teams and won a city championship in 1985.

He graduated from the U.S. Naval Academy in Annapolis, MD in 1990 and was commissioned a U.S. Naval Officer. He served two tours and was actively stationed in the Bosnia/Yugoslavia conflict. While in the navy he attended classes at Old Dominion University in Norfolk, VA. He graduated with his second degree in 1998, a B.S. in Mechanical Engineering.

Anthony accepted a job after leaving the military at Air Products and Chemicals, Allentown, PA where he was a dedicated employee for 23 years. He was currently designing and manufacturing hydrogen fueling stations in the US and China. He also recently signed a patent for one of the components which he helped design. His work was important to him because he believed in climate change, and he wanted in some small way to make a difference.

After surviving stage 4 Hodgkin’s Lymphoma in 2000, Anthony decided to train for his first marathon for Team in Training. One race and he was hooked. He ran marathons in Rome, Italy, Philadelphia, PA, Duluth, MN, the Boston marathon twice and the NYC marathon three times. He also ran half marathons and competed in mini triathlons. He loved riding his road bike and taking in the views of the Pennsylvania landscape especially in the fall when the leaves were changing.

Anthony passed along his love of swimming in the ocean, camping at the lake, and skiing in the mountains to his children. They will be forever grateful for the memories they made with his dad. He was a volunteer for Special Olympics where his son competed locally in track and field events. They even qualified to compete at the state level at Penn State University.

Anthony and his brother, Kevin, could often be found camping, canoeing, hiking or hunting and fishing. They were not only brothers but best friends. They have great memories of trips to Acadia, ME, Shenandoah, VA, the Adirondacks, NY and many other local spots for all their outdoor activities.

Anthony loved playing golf with his son, friends and work colleagues and had just purchased a set of clubs for his daughter so they could play together. Golf didn’t always love him back, but he enjoyed it anyway.

Anthony was always willing to help a family member, friend or neighbor whenever he could. He loved to tell stories, and his laugh was so infectious to those around him. He was a member of Sts. Constantine and Helen Greek Orthodox Church in Reading.

The family would like to thank the Cetronia Ambulance and the Weisenberg Volunteer Fire Department for their urgent response to the call. We would also like to thank the Critical Care Unit staff at Lehigh Valley Cedar Crest for the exceptional level of care Anthony received and the compassion extended to his immediate family.

Survivors: His wife Kristen; his parents Daniel and Margaret; his children Daniel, JT and Lily; his brother Kevin and his wife Susan and children Emma and Stephen; mother-in-law Judith and Robert Williams and father-in-law John and Linda Fleming; sister-in-law Michelle and her husband Dave and children Lauren and Ellie; sister-in-law Carrie and her fiance Pat and daughter Zoey.

Contributions: The family would prefer in lieu of flowers that a donation be made to the American Cancer Society or Special Olympics Lehigh Valley.

Let’s all try to live each of our days to the fullest just as Anthony lived each of his.