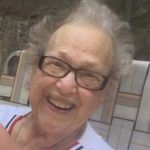 Louise was born in Bethlehem on March 15, 1935, daughter of the late Joseph and Elizabeth (Dolan) Galle.

Louise was a nurse’s aid at Holy Family Manor retiring after 30 years. Earlier she was the co-owner along with her husband Francis, of the former Atlantic Hotel in Bethlehem.

Louise was a member of the former Ss. Cyril and Methodius RCC in Bethlehem.

She was an avid bingo player, enjoyed ceramics and loved animals.

She will be lovingly remembered by her family as a devoted mother and grandmother.

Survivors: Her daughter Elizabeth A. Epsaro wife of Thomas P. of Hanover Twp., two grandchildren Michael and Lauren Epsaro and a great-grandson Carter Michael. Predeceased by a baby boy Francis in 1963.

Service: Mass on Friday April 13, 2018 at 10AM in Notre Dame Catholic Church 1861 Catasauqua Road Bethlehem. There will be a viewing on Thursday from 6PM to 8PM in the John F. Herron Funeral Home 458 Center At Market Street in Bethlehem. Burial in Holy Saviour Cemetery in Bethlehem.