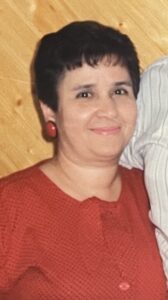 Marcee Fardis, 82 of Whitehall passed away on January 24, 2023 at Lehigh Valley Hospital-Cedar Crest.  She was the beloved wife of Alex Fardis , they would have been married 64 years on March 1st.

Marcee was born in Bethlehem on August 6, 1940, daughter of the late John G. and Mary (Roumeloites) Kakamburas.  She was a member of St. Nicholas Greek Orthodox Cathedral in Bethlehem.

Marcee was a member of the Daughters of Penelope, the Garden Club and the Senior Citizens of the Cathedral.  Marcee loved her family, friends, enjoyed cooking and baking.

Viewing and Service:  Saturday January 28, 2023, viewing 10AM to 11AM, followed by the Funeral Service at 11AM all at St. Nicholas Greek Orthodox Cathedral 1607 West Union Blvd. Bethlehem, PA  18018. Burial to follow in Cedar Hill Memorial Park Cemetery in Allentown. Funeral arrangements by the John F. Herron Funeral Home in Bethlehem. www.Herronfuneralhomes.com