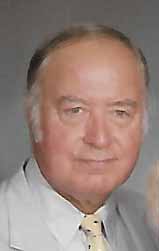 Peter G. Manakos,  of Salisbury Twp. died  peacefully on March 21, 2018 at Whitehall Manor in Allentown surrounded by his family.  Husband of Froso (Perdikis) Manakos,  they were married 60 years.

Born in Plaka, Athens, Greece,  son of the late George and Chrysoula Manakos.

Peter graduted  from the University of Athens in Greece,  the  Naval Academy of Greece  and  the London School of Economics.

Peter was the  Executive Director of the Lansdale  Public Library for over 30 years.

He was a member of St. Nicholas Greek Orthodox Cathedral in Bethlehem and St. George  Syrian Orthodox Church in Allentown.

He was a member of the Bethlehem Lodge #283,  a 32nd Degree Mason of the Valley of Allentown, former Lehigh County Republican  Committee Member  and  Life Member of the Order of AHEPA, Bethlehem Homer Chapter #65.

Peter was an avid gardener, swimmer, loved to take numerous trips to Greece and Cyprus. He  was a devoted grandfather to his two grandsons which he adored.

The family would like to thank the staff of Whitehall Manor  and Heartland Hospice who treated Peter so well while under their care.

Funeral Service on Saturday March 24, 2018 at 11 AM with a viewing from  10AM to 11 AM in St. Nicholas Greek Orthodox Cathedral 1607 West Union Blvd. Bethlehem.  Burial in Cedar Hill Memorial Park Cemetery in Allentown. Funeral arrangements are by the  John F. Herron Funeral Home, Bethlehem www.HerronFuneral Homes.com.