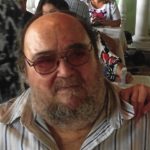 Terrence graduated from William Allen High School in 1967. He shortly thereafter joined the US Marine Corps as an Infantry Soldier as he served his country in Vietnam until he was wounded in 1968. He received the Purple Heart.

Upon returning from the war he became a truck driver over many years before retiring. He was an avid history buff and enjoyed sharing stories from his experiences. He was active with the local VA. He enjoyed watching old movies, football and WWE.

Contributions: In lieu of flowers, donations to be made to the Wounded Warrior Project.